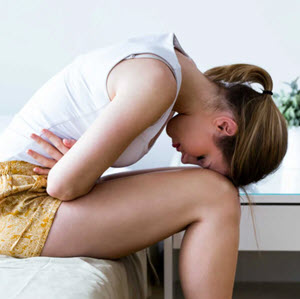 These drugs increase intestinal motility by various mechanisms; they may cause abdominal cramps, should used only with caution in pregnancy, and never where intestinal obstruction is suspected.

Bisacodyl stimulates sensory endings in the colon by direct action from the lumen. It is effective orally in 6-10 h and, as a suppository, acts in 1 h. In geriatric patients, bisacodyl suppositories reduce the need for regular enemas. There are no important unwanted effects.

Sodium picosulphate is similar and is also used to evacuate the bowel for investigative procedures and surgery.

Glycerol has a mild stimulant effect on the rectum when administered as a suppository.

The anthraquinone group of laxatives includes senna, danthron, cascara, rhubarb5 and aloes. In the small intestine soluble anthraquinone derivates are liberated and absorbed. These are excreted into the colon and act there, along with those that have escaped absorption, probably after being chemically changed by bacterial action.

Patients taking some anthraquinones may notice their urine coloured brown (if acid) or red (if alkaline). Prolonged use can cause melanosis of the colon.

Anthraquinone preparations made from crude plant extracts are to be avoided as their lack of standardisation leads to erratic results.

Senna, available as a biologically standardised preparation, is widely used to relieve constipation and to empty the bowel for investigative procedures and surgery. It acts in 8-12 h.

5 In the late 18th century Britain made approaches to trade with China which were met with indifference; it seems that the mandarins held the belief that the British feared death from constipation if deprived of rhubarb (Rheum palmatum), one of China's exports.

Danthron is available as a standardised preparation in combination with the faecal softeners poloxamer 188 (co-danthramer) and docusate sodium (as co-danthrusate). It acts in 6-12 h. Evidence from rodent studies indicates a possible carcinogenic risk and long-term exposure to danthron should be avoided.

Suppositories (bisacodyl, glycerin) may be used to obtain a bowel action in about 1 hour. Enemas produce defaecation by softening faeces and distending the bowel. They are used in preparation for surgery, radiological examination and endoscopy.7 Preparations with sodium phosphate, which is poorly absorbed and so retains water in the gut, are generally used. Arachis oil is included in enemas to soften impacted faeces.

Dependence (abuse) may arise following laxative use during an illness or in pregnancy, or the individual may have the mistaken notion that a daily bowel motion is essential for health, or that

7 Enemas may arouse complex psychosocial/sexual impulses ranging from frequent use for imagined self-cleansing (colonic lavage) to the extraordinary case of the 'Illinois enema bandit' (USA, 1966-75), a man who broke into women students' accommodation and forcibly administered enemas. His exploits were immortalised in song by Frank Zappa

I heard he's on the loose

I heard he's on the loose

Of all them college-educated women...

(They'd be all bound down!)

Just be pumpin' every one of 'em up with all the bag fulla The Illinois Enema Bandit Juice...'

the bowels are only incompletely opened by nature, and so indulge in regular purgation. This effectively prevents the easy return of normal habits because the more powerful stimulant purges empty the whole colon, whereas normal defaecation empties only the descending colon. Cessation of use after a few weeks is thus inevitably followed by a few days' constipation whilst sufficient material collects to restore the normal state; the delay may convince the patient of the continued need for purgatives. Laxative dependence, which may be solely emotional at first, may be followed by physical dependence, so that the bowels will not open without a purgative. Prolonged abuse can damage gut nerves and lead to an atonic colon.

It is easier to prevent laxative dependence than to cure it; patients feel they understand their own bowels far better than anyone else possibly could, an opinion they seldom extend to other organs, except perhaps the liver. In Britain, there is a belief that nurses have an intuitive understanding of the bowels that is denied to doctors.

Excessive use of stimulant purgatives8 may, especially in the old, lead to severe water and electrolyte depletion, even to hypokalemic paralysis, malabsorption and protein-losing enteropathy. Purgatives are dangerous if given to patients with undiagnosed abdominal pain, inflammatory bowel disease or obstruction. Nor should they be used to empty the rectum of hardened faeces, for they will fail and cause pain. Initial treatment should be with enemas, but digital removal, generally ordered by a senior and performed by a junior doctor, may occasionally be required. A bulking agent or a faecal softener will help to prevent recurrence.

8 The Roman Emperor Nero (AD 37-68) murdered his severely constipated aunt by ordering the doctors to give her 'a laxative of fatal strength'. He 'seized her property before she was quite dead and tore up the will so that nothing could escape him'. (Suetonius (trans) R Graves).

malnutrition among children in less developed countries; acute diarrhoea from gastroenteritis causes 4-5 million deaths throughout the world annually. Drugs have a place in its management but the first priority of therapy is to preserve fluid and electrolyte balance.