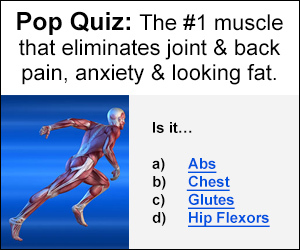 One could consider all the muscles in this area as upper leg muscles, playing an important role in maintaining our posture. All contribute to moving the upper thigh, and some facilitate hip rotation.

The pelvis is made up of two identical mirror-image bones called the innominate bones to which the sacrum is joined from behind. They are joined to each other in the front by a band of cartilage known as the pubic symphysis. You can also see where the head of the femur fits into the socket called the acetabulum. The male pelvis and the female pelvis are differently shaped because the female pelvis must provide an opening wide enough for giving birth. It is the female pelvis that I show.

THE PELVIS, POSTERIOR INFERIOR VIEW, SHOWING THE TOP PORTION OF THE FEMUR WITH ITS HEAD IN THE ACETABULUM

THE PELVIS, ANTERIOR INFERIOR VIEW, SHOWING THE TOP PORTION OF THE FEMUR WITH ITS HEAD IN THE ACETABULUM

The psoas major, the psoas minor and iliacus muscles are sometimes considered one, called the Iliopsoas muscle. I shall treat them separately, but show them together.

This muscle brings the leg up frontally and helps in curving the spine. It arises from the inner surfaces of all the lumbar vertebrae's transverse processes and from the sides of the bodies of the last thoracic and all the lumbar vertebrae. It then courses downwards into the pelvic area, getting narrower as it goes, and inserts on a protrusion of the upper rear part of the femur called the lesser trochanter.

Psoa is Greek for "muscle of the loins". THE PSOAS MINOR MUSCLE

The psoas minor muscle arises from the sides of the bodies of the last thoracic and first lumbar vertebrae and lies over the psoas major muscle as a thin bundle. It ends in a long tendinous insertion on the iliopectineal eminence of the pelvis. Sometimes this muscle cannot be found in dissection.

The iliacus muscle bends the thigh. It arises from the inner border of the iliac crest of the pelvic bone and from the upper fossa of the ilium of the pelvis. It inserts on the tendon of the psoas major muscle where that muscle inserts on the femur. Other fibers insert just around the lesser trochanter.

Ilium comes from the Latin ilium or ileum meaning flank or groin.

Rather than cause specific movements, this next group of muscles—the obturators, the gemelli, the quadratus femoris, and the piriformis—are short muscles that act together to maintain proper posture. They function more like flexible and elastic ligaments than like muscles.

You can have significantly bigger arms in only 31 days. How much bigger? That depends on a lot of factors. You werent able to select your parents so youre stuck with your genetic potential to build muscles. You may have a good potential or you may be like may of the rest of us who have averages Potential. Download this great free ebook and start learns how to build your muscles up.